This blog is where I post items of interest I come across from time to time. I completed my Ph.D. at Capella University in Organizational Management and Information Technology in 2013. You can reach me via email at dhlblackman@gmail.com

A prayer from the past —

The technique is also useful for analyzing historic paintings and detecting skin cancer. 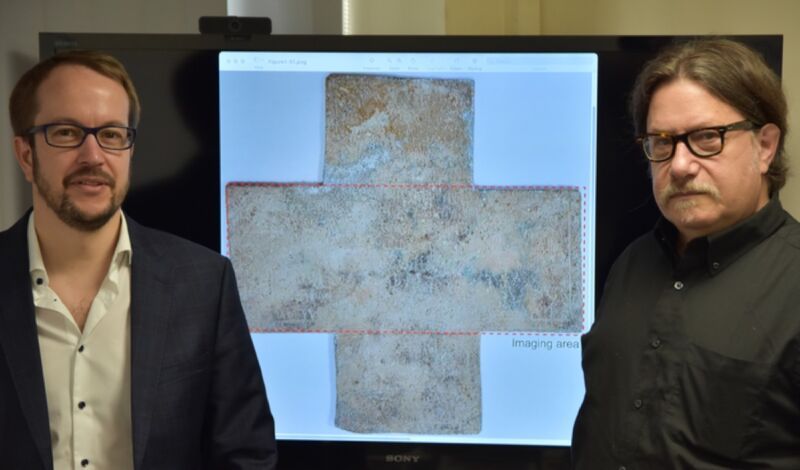 Enlarge/Georgia Tech's Alexandre Locquet (left) and David Citrin (right) with an image of the 16th-century funerary cross used in their study. Georgia Tech-Lorraine
In 1843, archaeologists excavated the burial grounds of Remiremont Abbey in Lorraine, France (the abbey was founded in the 7th century). It was medieval custom to bury the deceased with cross-shaped plaques cut from thin sheets of lead placed across the chest. The crosses often included inscribed prayers, but many of those inscriptions have been rendered unreadable over the ensuing centuries by layers of corrosion. Now, an interdisciplinary team of scientists has successfully subjected one such funerary cross to terahertz (THz) imaging and revealed its hidden inscription—fragments of the Lord's Prayer (Pater Noster)—according to a new paper published in the journal Scientific Reports.
"Our approach enabled us to read a text that was hidden beneath corrosion, perhaps for hundreds of years," said co-author Alexandre Locquetof Georgia Tech-Lorraine in Metz, France. "Clearly, approaches that access such information without damaging the object are of great interest to archaeologists." According to the authors, this approach is also useful for studying historical paintings, detecting skin cancer, measuring the thickness of automotive paints, and making sure turbine blade coatings adhere properly.
In recent years, a variety of cutting-edge non-destructive imaging methods have proved to be a boon to art conservationists and archaeologists alike. Each technique has its advantages and disadvantages. For instance, ground-penetrating radar (radio waves) is great for locating buried artifacts, among other uses, while lidar is useful for creating high-resolution maps of surface terrain. Infrared reflectography is well-suited to certain artworks whose materials contain pigments that reflect a lot of infrared light. Ultraviolet light is ideal for identifying varnishes and detecting any retouching that was done with white pigments containing zinc and titanium, although UV light doesn't penetrate paint layers.
Advertisement
There are also many X-ray imaging technologies that have been used to reveal new details about artifacts, including a famous 1788 portrait of Antoine Lavoisier and his wife by the Neoclassical painter Jaques-Louis David; the hull of Henry VIII's favorite warship, theMary Rose, which sank in battle in 1545; the 14th-century tomb of Edward of Woodstock (aka the Black Prince); and the mysterious Antikythera mechanism, an ancient device believed to have been used to track the heavens.

Enlarge/Three views of the paintingMadonna in Preghiera. (l-r) visible-light photography, ultraviolet fluorescence, and infrared reflectography. Junliang Dong et al., 2017
THz imaging fills a critical gap in frequencies ranging from about 100 GHz to 10 THz, according to co-author David Citrin of Georgia Tech. The technique gives researchers the ability to image a large object quickly and cheaply extract useful information about that object. Even better, THz radiation can penetrate paints and glazes without damaging the objects being imaged.
Citrin has compared the technique to how seismologists identify various layers of rock in the ground by emitting pulses of sound and then measuring the returning echoes. THz imaging uses high-frequency pulses of electromagnetic radiation in much the same way, measuring how that terahertz radiation reflects off the various layers of paint.
This latest project builds on Citrin's 2017 work applying terahertz scanners and data processing to examine the layers of a 17th-century painting: theMadonna in Preghiera, attributed to the workshop of Giovanni Battista Salvi da Sassoferrato. The painting was placed face-down, and the scanner emitted pulses of THz radiation every 200 microns across the canvas, measuring the reflections to discern layers between 100 to 150 microns thick. 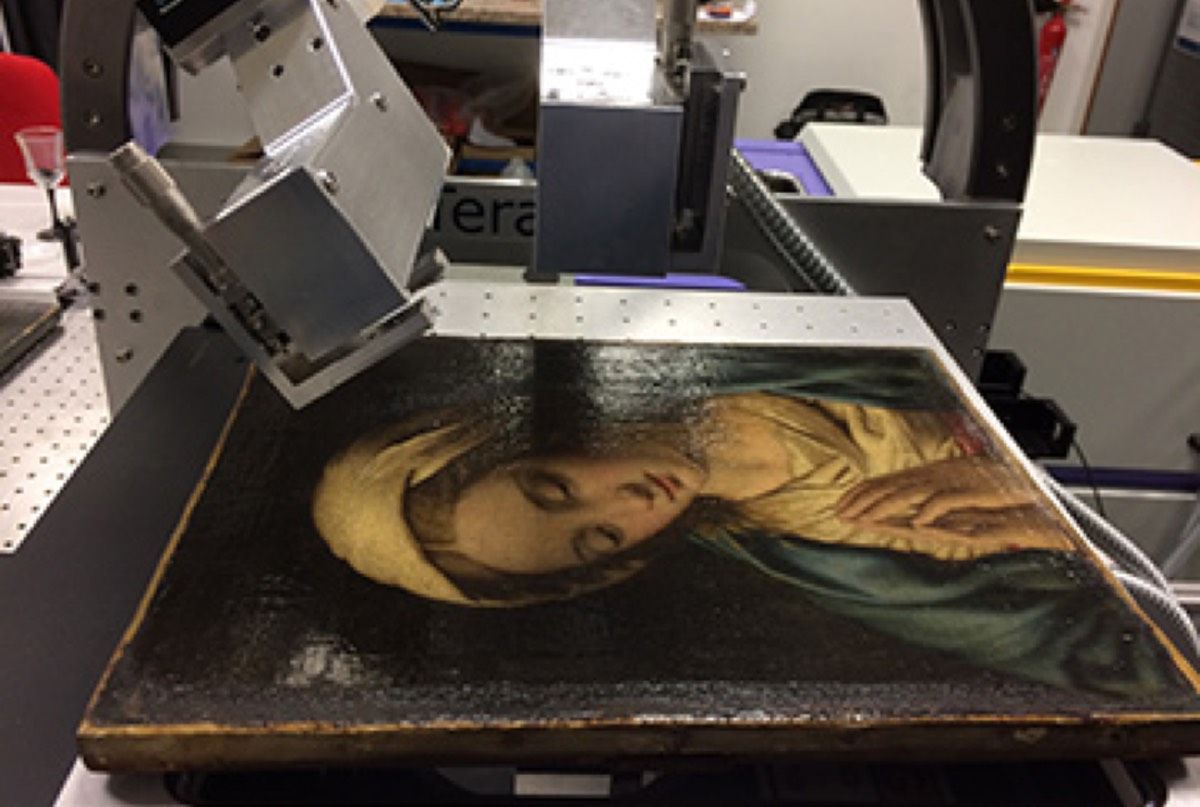 Enlarge/THz imaging of theMadonna in Preghierapainting, attributed to the workshop of Giovanni Battista Salvi da Sassoferrato. Junliang Dong et al., 2018
But it was the combination of the THz imaging with a signal processing breakthrough to eliminate noise, courtesy of graduate student Junliang Dong, that enabled the team to distinguish layers just 20 microns thick. It's an important threshold, because most paintings created before the 18th century have extremely thin layers of paint, making it very difficult to study them. This enabled the team to quantify six distinct layers on top of the canvas support: a binding layer (the gesso), an imprimatura base layer that serves as a sealant, an underpainting base layer, the actual painting (pictorial layer), and a coating of protective varnish.
Word spread about the effectiveness of the technique. Co-author Aurélien Vacheret, director of the Musée Charles-de-Bruyèresin Remiremont, arranged for the loan of the museum's heavily corroded medievalcroix d'absolution from the Remiremont site to Citrin's lab at Georgia Tech-Lorraine, hoping that Citrin might be able to discover what lay beneath the corrosion. "This type of cross typically bears inscriptions of prayers or information about the deceased," said Vacheret. "It is thought their purpose was to seek a person’s absolution from sin, facilitating their passage to heaven."
Advertisement 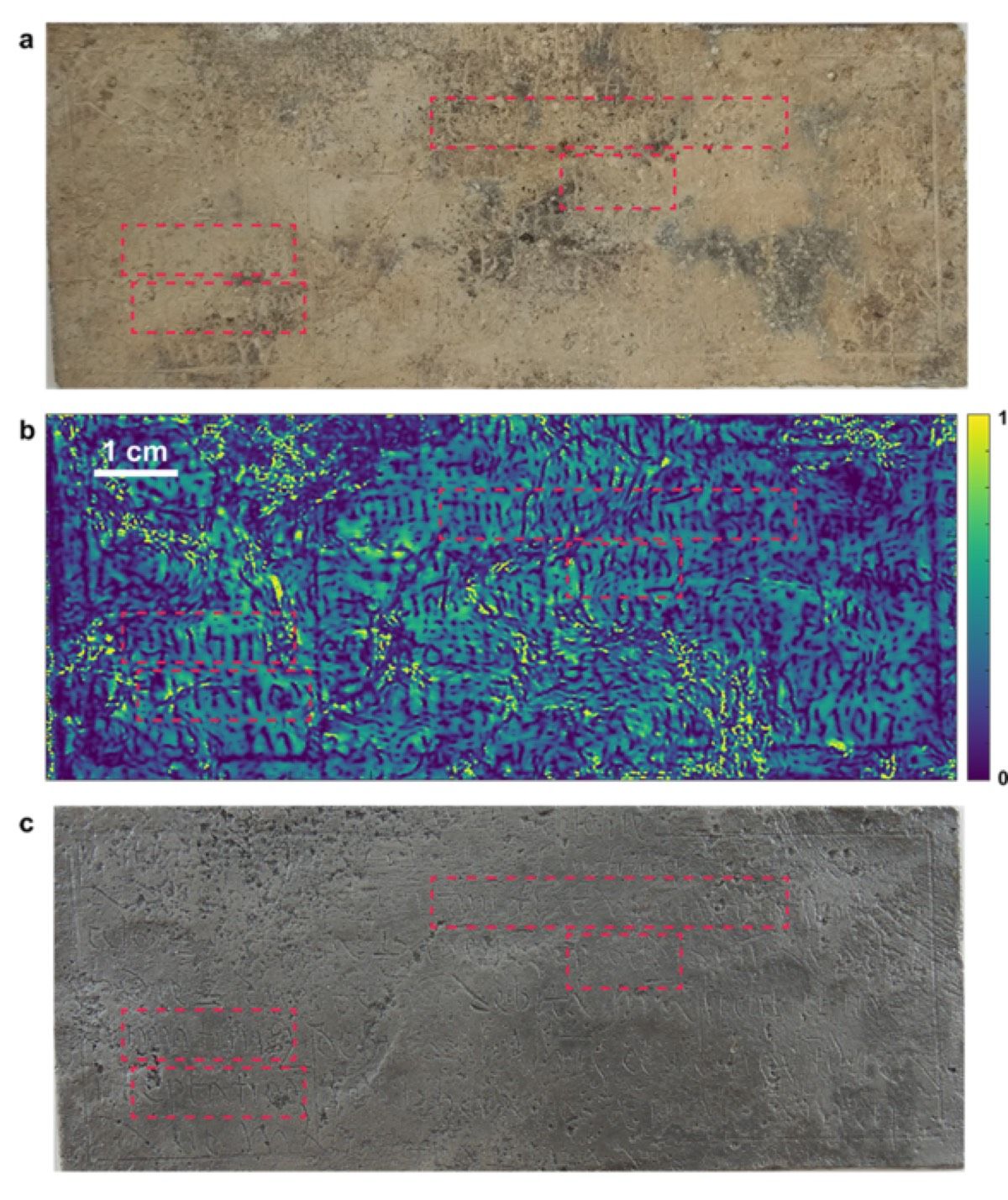 Enlarge/Comparison of the inscription on (a) the original cross before corrosion removal, (b) the final terahertz image after post-processing, and (c) the cross after corrosion removal. Georgia Tech-Lorraine
The data collected from the initial scan produced raw images that were too noisy to reveal much additional detail. But Dong was once again able to come up with a solution, subtracting and piecing together data from different frequencies to restore and enhance the image. This finally revealed a Latin inscription written in cursive Carolingian minuscule. Vacheret identified the words and phrases as being part of the Pater Noster:tuum fiat voluntastua, part ofquotidianum, and parts ofdimittimusandtentationem.
Conservationists were also able to reverse the corrosion and clean up the cross. The THz images captured more of the inscription than even the cleaned-up cross, making it an excellent technique for imaging lead-based artifacts (sarcophagi, monument plaques, or plumbing, for instance). "In this case, we were able to check our work afterward, but not all lead objects can be treated this way," Citrin said. "Some objects are large, some must remain in situ, and some are just too delicate. We hope our work opens up the study of other lead objects that might also yield secrets lying underneath corrosion."
DOI: Scientific Reports, 2022.10.1038/s41598-022-06982-2 (About DOIs).
Jennifer Ouellette is a senior writer at Ars Technica with a particular focus on where science meets culture, covering everything from physics and related interdisciplinary topics to her favorite films and TV series. Jennifer lives in Los Angeles.